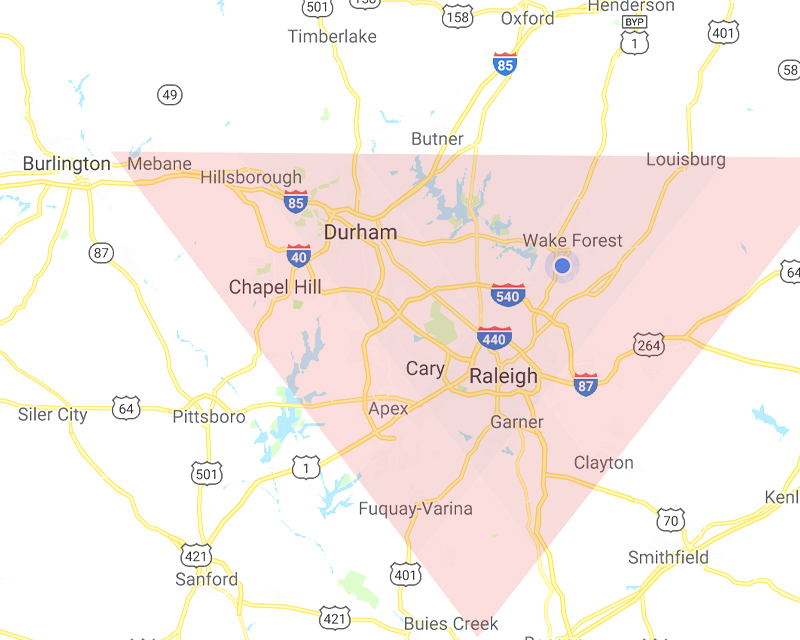 Want to move to the Triangle in North Carolina?  Do you live in the area and want to move to one of our awesome communities?  Here are some things you need to know about THE TRIANGLE and tips that will help you navigate through real estate in Raleigh, Durham, Chapel Hill and surrounding cities-

The Triangle refers to Raleigh-Durham-Chapel Hill, the three major cities in our region.  If you were to draw lines on a map to all three – you’ll get a TRIANGLE. Lots of surrounding cities are included when locals talk about The Triangle in North Carolina.

Locals will say Raleigh OR Durham – NOT Raleigh-Durham.  NOT RDU.  RDU is our airport, owned by both towns – so, if you were to tell someone you are moving to RDU, they may offer you a pillow and blanket for staying in the airport.  Raleigh and Durham are very different cities, both with communities and homes that offer something for everyone.

If you are a FOODIE – you’ve come to the right area.  I mean…Wow!  Check out Raleigh restaurants HERE and Durham area restaurants HERE.  Dining in the Triangle is a feast!

WAKE FOREST is a town in the Triangle,  the University.  Wake Forest University is in Winston-Salem, which is in The Triad. Confusing right?  I know.

Raleigh is all about a downtown vibe, music, sports, universities, trees, subdivisions, families, singles, and research and MORE!  No wonder is ranked high on soooo many lists.  Raleigh truly has something for everyone and great employment options.

Raleigh's founding fathers called Raleigh the "City of Oaks" and dedicated themselves to maintaining the area's wooded tracts and grassy parks. Home of the N.C. State Fair, N.C.'s largest annual event.  If you visit Raleigh and see the beautiful Oak trees, you'll see what we mean.

Talk about some greenspace!  Raleigh boasts more than 9,000 acres of parkland and almost 1,300 acres of water, offering recreational activities year-round. A nationally-acclaimed greenway system spans more than 180 miles, providing walking, jogging and hiking trails that connect many of the City of Raleigh's 200+ parks and Town of Cary's 30+ parks. Surrounding towns have even more parks and recreational opportunities.

Durham County is unique in more ways than one, but one of the more interesting aspects of this second most populous county is that it is home to only one city, the City of Durham, also known as the City of Medicine. But don’t think for a second that this is not a diverse community.  Durham is home to Duke University and North Carolina Central University.

CHAPEL HILL (everyone pronounces this correctly)

When Orange County is mentioned, most people in the Triangle immediately think of the University of North Carolina at Chapel Hill. While it is a huge component of the County’s image, residents know there is so much more than UNC. In fact, Chapel Hill isn’t even the seat of county government, the beautiful small town of Hillsborough holds that distinction. And you can’t forget Carrboro—easily one of the Triangle’s hippest communities filled with art galleries and dining options that cities twice its size would love to have.

It's Not Just a Home. It's Your Life.